Ceda & Stu – Legals only elopement whilst floating down the river

Okay so let me set the scene a littl 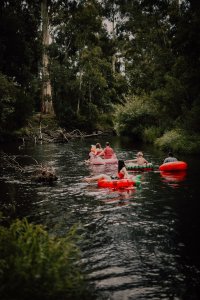 Ceda & Stu were moving to America and marriage became a part of this next step in their lives.

It was short notice and their loved ones are spread all over the world.

Bringing everyone together for a big celebration wasn’t practical.

So they settled on a simple Legals Only ceremony, an elopement if you will.

Now I should mention, that I was already fortunate to know Ceda as a friend.

When she reached out to tell me their marriage plans it coincided with a camping trip Ceda’s group of friends take once a year (when they are all in the same place that is!) I occasionally go along and we made plans to chat marriage when I visited the camp.

Now, this is an especially fun camping trip! Think: eating scrumptious food, reading books by the river, a penchant for dress ups and most importantly lazing about on inflatable devices as you float the river loop again and again! 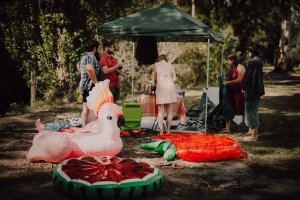 So as Ceda & I floated, we discussed the simplicity of a Legals Only ceremony. I explained that it only requires that we share about two minutes worth of wording and it could be done anywhere, even right here on the river.

Now Ceda is a creative girl; she is a woman of vision and Stu is just as open to an adventure.

On a quiet weekday afternoon, we gathered with two of their closest friends for their elopement. And we performed their very special Legals Only ceremony.

At the top of the river, each of them shared an exert from a favorite book.

And then we floated…. Half way down the river we stood in the shallows as Ceda & Stu exchanged their vows.

And then we floated…. At the bottom of the river, we got out of the water and signed their certificates of marriage.

And then we feasted…

It was a simple Legals Only ceremony, but it reflected their personalities and was full of meaning.

Getting married doesn’t have to be big and expensive. It can be small and intimate. It may even be a little adventure, but what is most important is that it reflects what’s important to the two of you in your own way.

I love being a part of unique, personalised celebrations and elopements. If you want help bringing your idea to life or want to brainstorm possibilities of how to make your Legals Only ceremony more you, please get in touch via my contact form NOW!!!

I am so excited to hear from you.